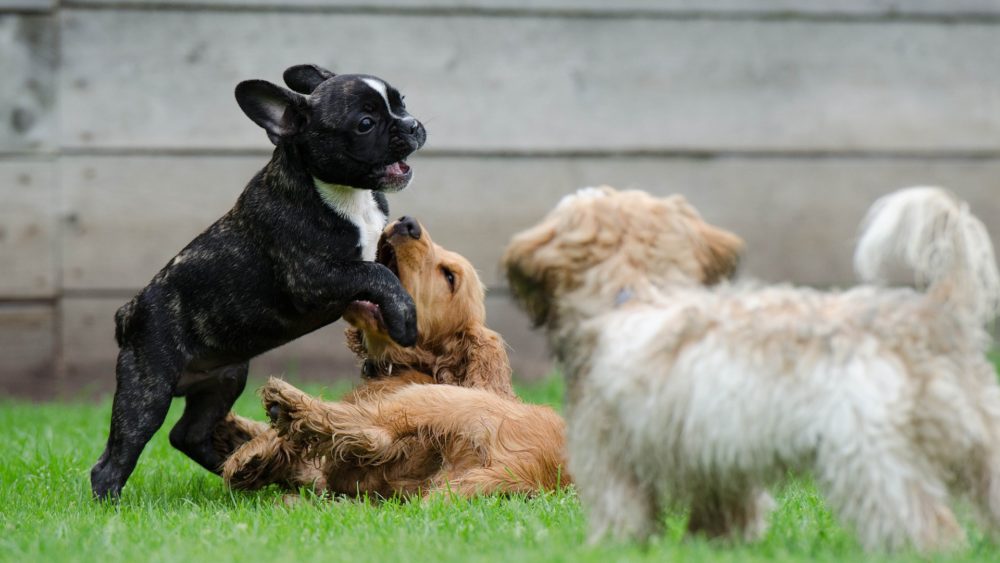 Are your dogs playing or fighting? 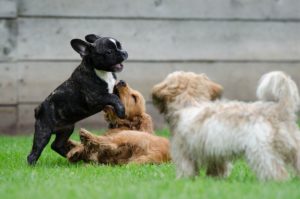 At first glance, it can be hard to tell if two dogs are playing or fighting. There’s a very good reason play looks that way sometimes and there are handy signs to tell the good from the bad.

Most animals, including humans, play in a way to develop their skills. This is especially true of animal cubs in the wild. They pounce, wrestle, and “hunt” their siblings, bugs, or maybe grass in the wind. This play is actually a valuable lesson that will help them survive once they’re old enough.

Since all dogs are evolved from wolves, but no longer need to hunt or fight to survive in their day-to-day lives, dogs typically wrestle for the purest of reasons. Occasionally some play could turn into a dominance move out of instinct though and that’s what you need to be aware of. But there are cues you can use to make sure your dog’s play is still okay.

The mouth: There’s biting and then there’s biting.  Dog’s use their mouths like we use our hands so just because a dog has its mouth on another dog, or you for that matter, it doesn’t mean it’s biting with the intent to hurt. Granted it can be scary since there’s a lot of sharp teeth hanging out in there, but what you really need to watch is your dog’s tail and back fur to clue you in.

The Tail: Any animal with a tail instinctually tucks it down if they’re getting ready to defend itself or attack something for real. That’s part of their fight or flight response, this is to protect it from whoever would be after them. If your dog’s tail is up and wagging, they’re usually playing. This can be an extremely helpful sign to remember, especially if your dog is a loud player and likes to grumble or growl.

Back fur: If your dog’s fur is laying flat along their back they’re calm and having a good time. If the fur along their spine is raised straight up they’re upset or scared. You’ve probably noticed this if your dog barks every time FedEx tries to deliver something to you. In the wild, this would have been a way to appear larger against your opponent.

Ears: Similarly to your dog’s tail if they become scared or upset their ears will lay flat against their head. Again, in the wild, this would protect them from getting bitten or scratched. But if the ears are up, all should be okay.

Remember dogs love to play and it’s very important that they do from an early age. But not every dog plays the same, so keep an open mind. Just because someone’s growling or barks that doesn’t mean they’re aggressive. It’s also important to know that even the best of play can shift gears very quickly into a potential fight, think about two young kids playing with the same toy – the tone can change quickly if one isn’t sharing enough with the other. It’s helpful to understand the general signs of dog play, but remember that everyone is different and the more you know your dog and your dog’s friends the better off you are. Pre-emptive de-escalation is THE BEST way to break up a dog fight. If you think something’s getting a little too rough try and gently call the dogs apart or distract them with a tennis ball or a couple of toys, enough that they both have at least one to choose from.